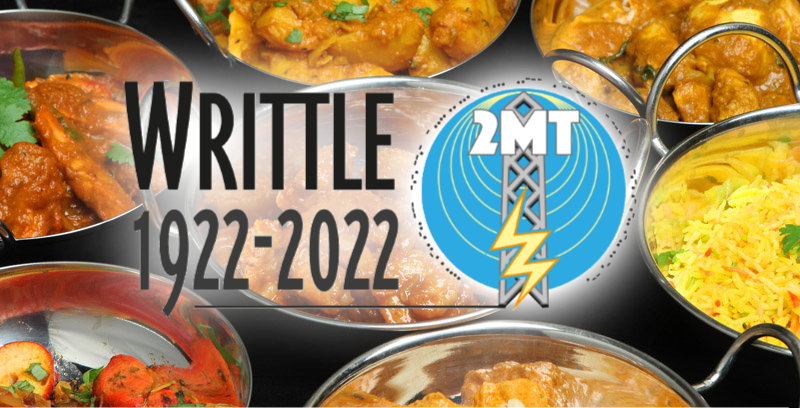 Members and guests are invited to join us to celebrate 100 years since radio broadcasting first began in Writtle.

Did you know that the world's first radio station started in Writtle in 1922? Called 2MT ("Two Emma Toc"), this humble – and somewhat experimental – enterprise operating from a small hut ultimately became the BBC as we know it today.

Exactly 100 years ago, Marconi Company engineers sat in the snug of the old Cock and Bell Inn – now the site of the Pakwaan – and planned the first ever scheduled radio broadcasts in the form of concerts to be aired by 2MT. The success of this station, under Captain Peter Eckersley, led directly to the start of the BBC.

We invite you to join us for a special one-off evening to celebrate this significant milestone. Like those Marconi engineers 100 years ago, this is an opportunity to eat, drink, and maybe even change the world...

7pm – Dinner followed by speech and presentation of commemorative plaque

The restaurant is all ours for the evening with an excellent set menu with all the trimmings to choose from. The after-dinner speaker will be Writtle 2MT and Marconi historian Tim Wander, and a plaque will be presented to the restaurant owners.

Spaces are limited and must be pre-booked by Monday 16 May. Click here to book.

We look forward to seeing you there! Read on for a little more of the story...

The story of 2MT and the Cock and Bell

The Pakwaan is now located in the building that was once the old Cock and Bell Inn. Here, during the summer of 1922, Marconi Company engineers both lived and planned the first concerts for Britain's first regular radio broadcast station in the public house. The radio station was of course known by its call sign 2MT or Two Emma-Toc, and its success, under the leadership of Captain Peter Eckersley, led directly to the start of the BBC.

The public house, or more simply "the pub", is often a focal point for life in many English villages, and Writtle is no different. The Cock and Bell pub stood directly opposite St John's Green, unusually the village's second village green, on the corner of Lodge Street and Bridge Street. From St John's Green, it is only a hundred yards to the original Marconi site on Lawford Lane.

"We got to know them all because they all came into the Cock and Bell for lunch which was served; hot lunch at the large sum of two shillings ... they had that in the little room – I think they now call the snug room – but we called it the sitting room. They had it privately, but they were nice lads and one of them ended up marrying my older sister [Elizabeth Beeson] ... who was Captain Eckersley's secretary; she worked down there and helped him quite a bit with some of his rhymes and bits that he broadcast." — Doris Beeson

The Cock and Bell is one of the oldest of Writtle's public houses, and as the main route from London to the east passed through Writtle, its corner site made it an important staging post, providing food, refreshments and shelter for weary travellers and their horses. It isn't every pub that has a brewery across the road, but such was the case of the Cock and Bell. The village brewery was well-established by 1769 when official records of alehouse keepers of Writtle began, although a mention of "Ye Cock" in Writtle can be found in 1573.

The Cock and Bell pub was run by Mr Henry Muncy Beeson, who held the Cock and Bell licence for thirty-five years from 1894 until 1929. It was his daughter Elizabeth Beeson, born on 25 May 1893, who took her London secretarial training, her Pitman shorthand and new typing skills to the Marconi Writtle site as Peter Eckersley's secretary. Her sister Doris, born on 3 March 1904, was to marry Edward Trump, one of the pioneering engineers from station 2MT at Writtle.

Henry's wife kept order in the pub and prepared the evening meal for the engineers. When fish and chips weren't available, she could also produce an excellent meal. So it was that in the Cock and Bell pub, the Writtle broadcasts were planned and the engineers 'refuelled' before their night-time endeavours, eating dinner together in the pub's snuggery.

It is exactly 100 years since the Marconi Writtle engineers sat in the snug and planned the first ever scheduled radio broadcasts, where they drank gin, ate fish and chips and changed the world. So please join us for a very special one-off evening.

... And if you listen quietly, the ghosts of engineers long past may still sit in the bay windows, arguing about valve currents and aerial reflections, and perhaps laughing about that night's broadcast, because it will forever be the place where British radio broadcasting was dreamt up and made real.